This unique exhibition will present an extensive collection of Russian Contemporary oil paintings with styles ranging from surrealism to post-modernism. a variety of sculptures, sketches and oil paintings will be included in this exciting exhibition. We will be showing art works by Alexei Sundukov and Alexander Zhacharov, whose have been international acclaimed, and both artists are now living in New York. Beside these two prominent Russian artists, we also be showing paintings by Viatcheslav Kalinin, Oleg Tselkov. Oscar Rabin, Vladrnir Kush, Alexander Brovin, Alexander Gazhur and Sergey Volkov, whose works also are attracting great interest in Russia and internationally.

Alexei Sundukov was born in Kubishevskaya Oblast in 1952, graduated from Stroganov Art School in 1982. He has been a major figure in contemporary Russian art since the 1980s. He skillfully uses shades of black and white, to explore the frantic universe of the occidental history, in a photographic colour scheme.

Alexander Zhacharov was born in Moscow in 1960. In 1980 he entered the Academy of Art in Moscow and became a member of the "official" Youth Department of Soviet Painters. Zhacharovs' oil paintings are bright excessive works that explore the taboos of mans origins.

Viatcheslav Kalinin was born in Moscow in 1939, graduated from the renowned Abramtsevo Art Institute. He is member of the official Union of Artists of the Soviet Union.

Oleg Tselkov was born in Moscow in 1934, studied art in Moscow, Minsk, Leningrad, and graduated as a stage designer from the Leningrad Institute. Since then, he devoted himself entirely to painting, quickly achieved great success. He had major shows in France. Japan. Germany, and USA.

Alexander Gazhur was born in 1955 in Moscow, graduated from Art School and Moscow University. His surrealistic works are to be found in museums and private collections in USSR, USA, Germany, Great Britain, Italy, and other countries.

Sergei Volkov was born in 1956 in Kazan, graduated from Architecture Department, Kazan Building Institute in 1980. He often uses images reduced to the schema of universally comprehensible signs. His desire for communication across frontiers. without let or hindrance. is emphasized by the absolutely mechanical nature of his knifed-on paint surfaces, which have shed the last vestige of individual personality. 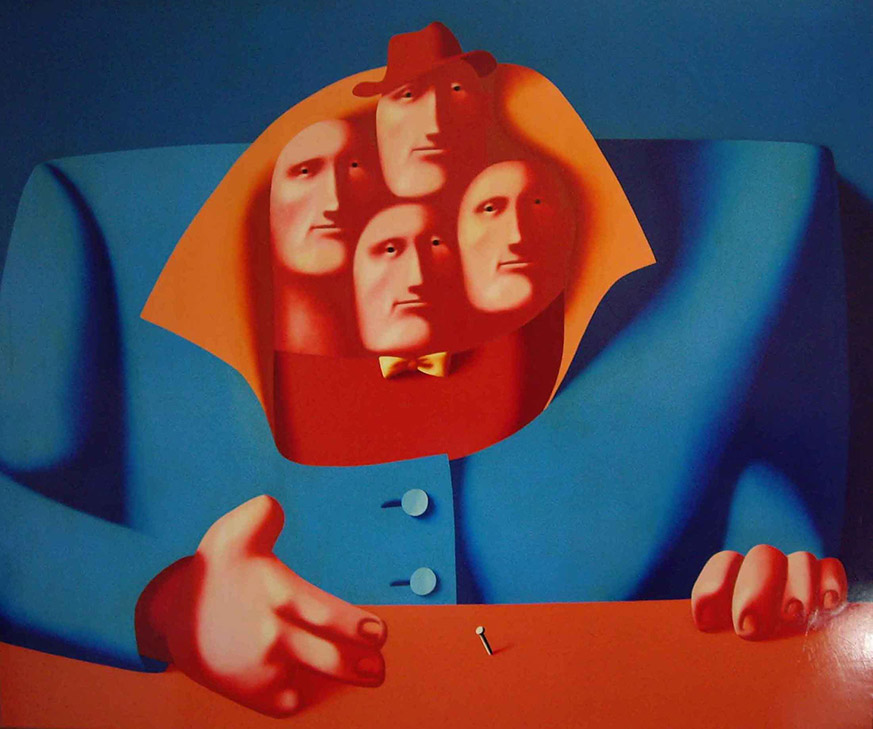