Chinese artist Yang Shaobin and Yue Minjun, the major voices in carrying avant-garde art to the public of Beijing and Hong Kong, will be holding their two-men show for the first time in Hong Kong this summer. An exhibition entitled Faces Behind the Bamboo Curtains-Works by Yue Minjun and Yang Shaobin, comprising an exciting collection of edge-cutting paintings. The exhibition will be held at Schoeni Art Gallery on Wednesday, 6 July and the show will continue through Saturday, 6 August.

Yue Minjun and Yang Shaobin are considered to be the “third generation” artists after the Cultural Revolution. With the introduction of Western ideas and a more relaxed regine during the 80’s, resulted a new cultural atmosphere in the realm of Visual Arts. While the desire of preserving Chinese traditionalism and ideology can been seen from the work of first and second generation, the third generation takes us back to a view much closer to the ordinary events of our lives. Therefore, in the work of Yue and Yang reflect the current social development and changes in their society. They are cynical yet playful, and evoke questions of consumerism, anti individualism and re-valuation of old beliefs.

The current exhibition will be featuring over twenty works form Yue and Yang. In the work of Yue Minjun, the artist depicts a sea of laughing man (Beijing youths) in identical dress code standing or floating around either in the streets of Beijing or Tiananmen Square. Despite falseness to their cheers, Yue stresses the absurdity between consumerism and anti individualism presented us these new “phenomenon” which exist in China today.

Yang Shaobin, by contrast, chooses the “role model” of high time. While the “humanization” on these political leaders, liberation army and police officers brings a hilarious and cutting effect to his work, the artist also challenges the value of old beliefs and standard rule of our society. As China is now experiencing speedy economic and social transformation, the changes of our old beliefs is also inevitable. The messages which carried out in Yang Shaobin’s work indeed reflecting their social and economic changes during the 90’s 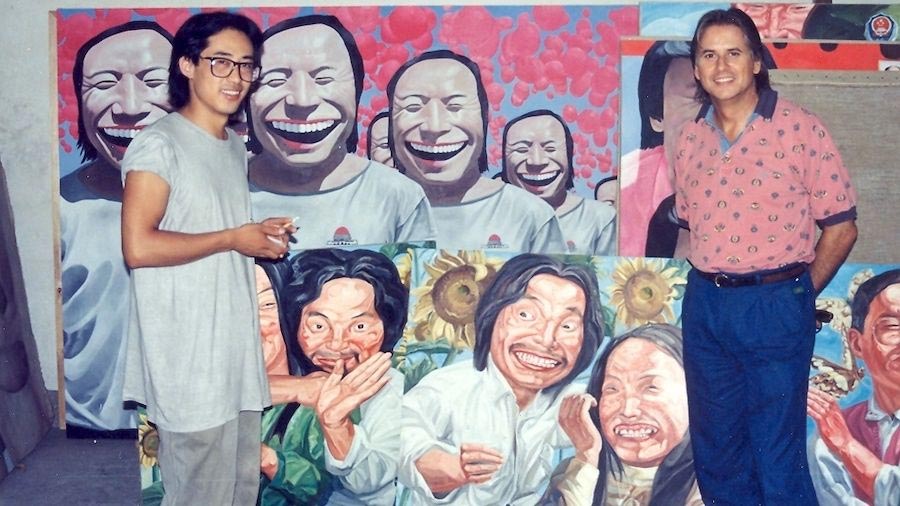 Faces Behind the Bamboo Curtains 2