The exhibition Wang Yidong’s Recent work represents Schoeni Art Gallery’s most recent effort in bringing to the attention of the Hong Kong audience, works of important artists from around the world. Past exhibitions organized by Mr. Manfred Schoeni featuring international artists include Liu Dahong from China and Russian artist Vladimir Kush. Upcoming shows in October and November 1993 will feature a selection of works by 19th and 20th century European masters and paintings of world renowned Russian artist, Alexei Sundukov.

Wang Yidong’s Recent Works will open at Schoeni Art Gallery on Saturday, 18September 1993 and will continue through Friday, 15 October 1993.

Chinese artist, Wang Yidong’s works are not unfamiliar to Hong Kong art lovers and collectors as his painting Raining at Mount Meng fetched a record price at an auction of Chinese oil paintings in 1992. The uniqueness of this unprecedented on-man show in Hong Kong lies in the fact that nine of his finest works will be on view, providing the opportunity for a more in-depth understanding of the artist’s latest works. The works on display, all of them in the medium of oil on canvas, are his fruits of labour over the past two years.

Born in 1955, in the mountains Yimeng region of Shandong Province in The People’s Republic of China, Wang Yidong began to teach himself to paint as a young boy. At the age of 17, he entered the Shandong School of Art and was later accepted into the prestigious Chinese Central Academy of Art in Beijing. AT the Academy, studying with professors who have sojourned in Europe, Wang Yidong was exposed to the influences of Western art as well as to the classical subjects and techniques of Chinese brushwork. Since his graduation in 1982, Wang Yidong has remained at the academy and is at present an Associate Professor of the Oil Painting Department.

During the past ten years, Wang Yidong’s fame as one of the leading representatives of Chinese Realism has spread beyond the boundaries of China. His participation in solo and group shows has been widely acclaimed by art critics in numerous countries in Asia, Europe, Canada and U.S.A. In spite of frequent travels abroad, Wang Yidong maintains very close ties with his native village in Northern China. Farmers and villages remain a main source of inspiration for his subject matters. The artist not only aspires to a truthful representation of the inner qualities and strength of the rural population through his paintings , but provide ample insight into the everyday life of the inhabitants of China’s countryside.

The fine drawing, the distinct lines and the precise composition inspired by the meticulous brush work of Ming and Qing portraits further emphasize the complexity of the inner emotive world of Wang Yidong’s subjects. His paintings confront us with mystery and an inner beauty based on simplicity and truthfulness. Prominent Chinese art critic Wand Hong Jian comments, “Wang Yi don does not give his subjects anything which does not belong. Their beauty is based on truth, which is more impressive and more touching. One of the major works of the exhibition Yi River depicts two young village girls beside a river. One of the girls has fallen asleep on the rocky banks and the other is trying to balance herself on a small rock. The unaffected gracefulness of his two subjects contrasts boldly with the austerity of the landscape. The beauty which emanates form this painting can only be the outcome of the artist’s sincere and profound observation of his subjects and man’s relationship with his surroundings. 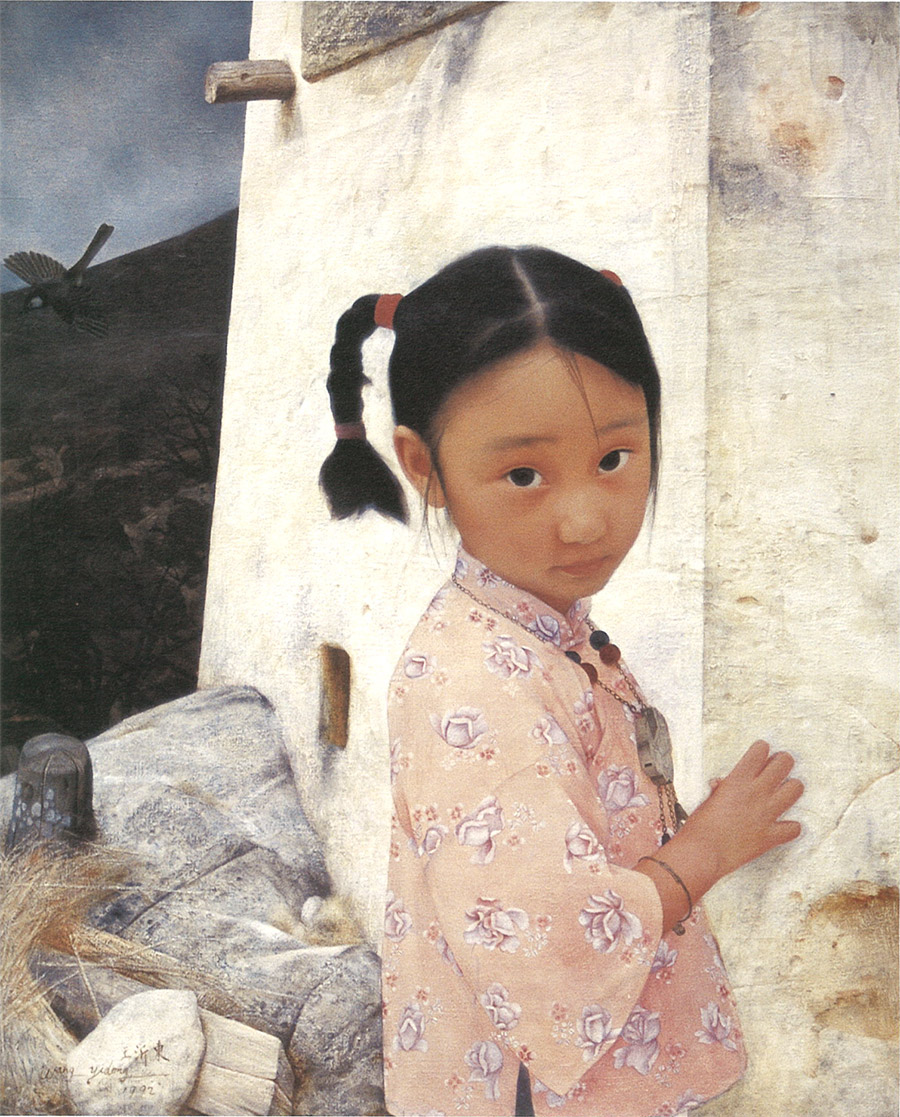