There is a chilli-sharp tang to contemporary art in Sichuan which, like its fiery cuisine, is distinctly an acquired taste.

The front runners in the field are graduates from the Sichuan Academy of Fine Arts from the classes of 1982 and 1983, artists such as Ting Fang, Mao Yao Fei and He Doe Te.

This was the first group of artists who broke free from the traditional old school of Chinese painters and calligra­phic artists to explore and cre­ate a new visual vocabulary us­ing local folk images with a surrealistic twist. From the 1980s to the 1990s, the artists concentrated on what they de­scribed as "alienation of reali­ty," a process of stylised ima­gery with extraordinary atten­tion to detail.

The 1990s saw the emer­gence of a new breed of Si­chuan artists such as Xin Hai Zhou, Guo Wei and Guo Jin. Their focus shifted from the surrealist mode to focus on the artist's involvement with reality. The emphasis was on aesthetic development, the prime concern of the artists.

In stylistic terms, Sichuan art tends to go one step sharp­er than the school represented by the Beijing Cynical Realists.

Although less witty than their Beijing counterparts, and a shade cooler when looking at themselves from a detach­ed perspective, their composi­tions have an arresting appeal all of their own, the principal feature of contemporary Si­chuan art.

Hong Kong will have the chance to glimpse some of these creations when Schoeni Art Gallery unveils the works of six Sichuan artists next week.

Zhang Bin, one of the artists, is described as the Andy Warhol of Sichuan art. Inte­grating pop culture with a dash of surrealism, Zhang pa­rodies political slogans and commercials in poster-style creations.

Falling Down I is a fine exam­ple of Zhang's style that shows a gymnast doing a somersault against the backdrop of an im­posing and arresting Chinese Opera singer.

Zhang says he uses popular imagery, which fuses culture and society in one cohesive composition. The artist, who graduated in 1989 with a de­gree in printmaking from Sichuan Academy of Fine Arts, created the Red Army Series of paintings that were featured in a travelling exhi­bition throughout China in 1991-1992.

Zhang's Red Army No. 1 was one of the exhibits at the Chi­nese Printmaking Exhibition in the United States in 1993. A year earlier, Zhang's Painting Red Dance made its Hong Kong debut in Art Asia '92.

"What I try to do," Zhang said, "is to question the rela­tionship between modem man and the society in which he finds himself." He explains that his poster-style technique as "'non-expressive and pop that adds weight to the work" in a new form of visual lan­guage.

Another artist showcased at the Schoeni exhibition is Xin Hai Zhou whose works were exhibited at the Chinese Avant­ Garde Art Show in the United States (1990), the First Guang Zhou Biennial Art Exhibition and the Second Contemporary Chinese Art and Literature Ex­hibition (1992), Post 89: New Art from China in Hong Kong (1993) and Contemporary Chinese Exhibition in Spain earlier this year.

In Cheap Labour, Xin's entry at the Schoeni exhibition, the artist tries to capture the mood of a jobless group awaiting a call to work. 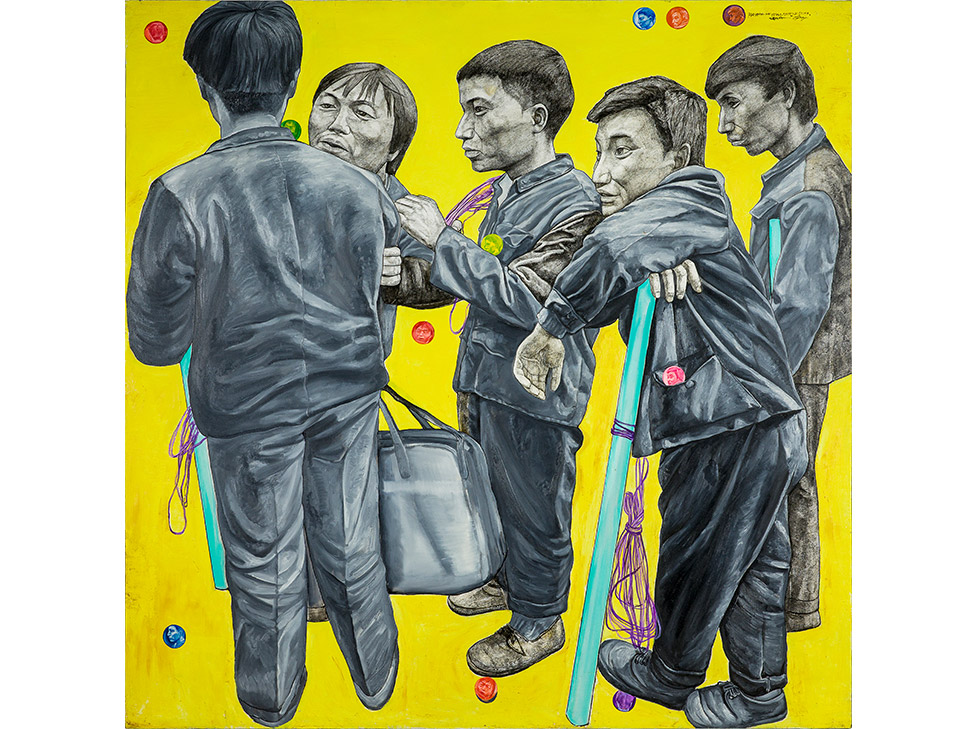