Schoeni Art Gallery is happy to announce the inaugural exhibition at 1 On Hing Terrace in Central, for its opening of the Gallery on Monday, March 15, 1993.

Schoeni Art Gallery will exhibit primarily the works of contemporary Chinese artists. The creative energy and vision of Chinese artists is increasingly recognized in Asia and the West by collectors, curators and critics alike. Schoeni Art Gallery will bring to Hong Kong, painters whom we believe, possess some of the most distinctive voices among artist at work in China today.

The Gallery’s inaugural exhibition is a group show of 18 painters, which are, with a few exceptions exclusively represented by Schoeni Art Gallery led by Liu Dahong, whose November 1992 show at the China Club that we sponsored was a commercial and critical success. The other Chinese painters are Wang Yidong, Jiang Guofang, Weng Danxian, Zhang Gong, Hong Ling and Chen Ning and Xia Xing. In the months to come, Schoeni Art Gallery will mount solo exhibitions for artist whose work deserves special focus and a wider audience.

This first exhibition will also showcase the work of Russian painters, Tselkov, Sundukov, Zhacharov, Kalinin, Purygin, whose international reputations have been confirmed with exhibitions in Europe and the United States over the last twenty years and the well respected Swiss painter Gerard Bregnard.

With detailed background information of the artists, a catalogue of the exhibition is published by the gallery along with the show. 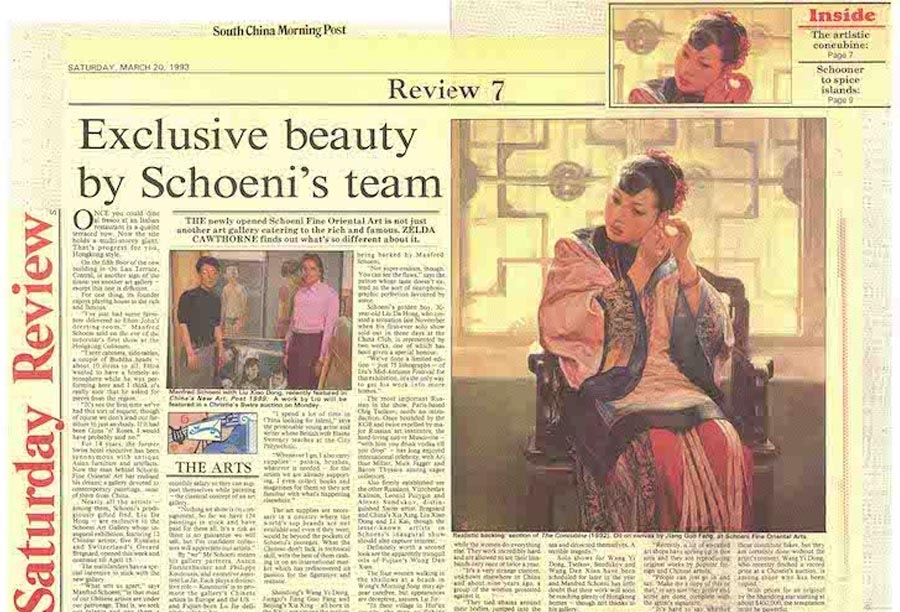